With the aim of identifying and contributing to local needs in the context that we are going through as a country, Conciencia launched “Convoluntariado”, a campaign to donate bags of food and cleaning supplies in neighborhoods where they implement programs throughout the year, and that today are greatly affected by the situation generated by COVID-19.

What are they doing? Delivering bags of food and cleaning supplies to the neighborhood leaders so the they deliver them among the families. Currently they have reached the communities of San Martín, Tigre, Avellaneda and Quilmes in Greater Buenos Aires, Mar del Plata, Venado Tuerto and Tucumán. Along with the delivery of the bags, they added educational booklets for families during this period of compulsory social distancing.

Why do they do it? The community leaders with whom they work in the neighborhoods warned them about the exacerbation of the food emergency, many people who do casual work or have informal jobs were left without income and the number of people who attend the dining rooms doubled.

How do they do it? They have launched a donation campaign, each person can donate $750 Argentine pesos, and with that amount of money they can accompany a family of 6 people with a bag of food and cleaning supplies for a week. They also invite companies that would like to accompany them with monetary or in-kind donations to join this campaign.

Money donations will be turned into bags of food that will be delivered among the neighborhoods where they work throughout the country. This campaign is articulated strategically with different organizations such as Nilus and Construyendo in the Province of Buenos Aires, as well as the Banco de Alimentos in Tucumán and the Banco de Alimentos Manos Solidarias in Mar del Plata.

For more information and to collaborate with Conciencia, please enter: 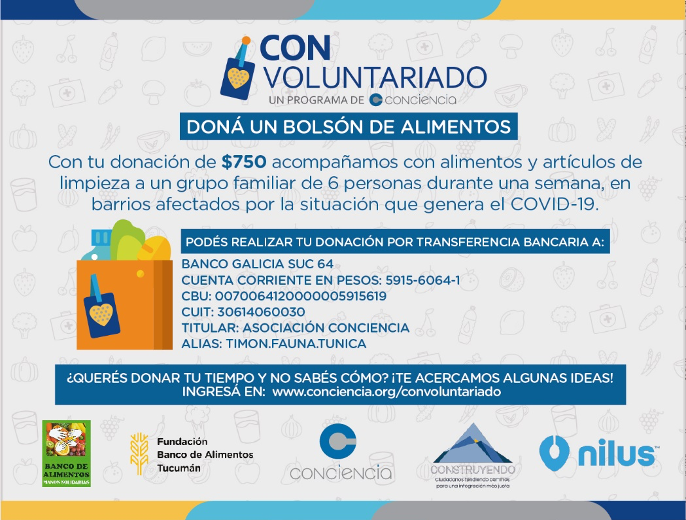 Asociación Conciencia is a non-profit civil society organization, following no political party, that has been working for more than 37 years to form committed citizens who can transform the reality that we live, with the ability to decide and the will to participate.

They implement programs throughout the country seeking to respond to the specific needs of each community. Through their action they reflect the values of their organization: responsibility, commitment, tolerance, honesty, transparency, respect and coherence.