Last Wednesday, August 26th, RACI – with the support of AGNA (CIVICUS) – held the first virtual unconference, whose guiding theme was “Resource Mobilization: How to Strengthen Civil Society?” The particularity of this new space for exchange was that the agenda was co-created together with the participants, who proposed the topics to be treated on the meeting. In addition, this event did not have formal moderators, but was developed as an open space for dialogue between the participants and the invited panelists: Amy Taylor (CIVICUS), Carlos March (Fundación Avina), Gabriela Masmut (Government of the province of Salta), Paula Cardenau (Arbusta), Pilar Arcidiácono (CONICET – UBA), Roxana Fantin (Austral University – Comunia) and Shawn Sieh (Social Innovations Advisory).

The objective of the event was to be able to offer a space for free and plural exchange and debate around central issues that occupy the current CSO agenda when it comes to resource mobilization. The event began with a general welcome and followed with a short pitch from the panelists related to the mobilization of resources towards Civil Society. Then, the participants and guests were divided into sessions, in which the following specific topics were worked on, such as:

In addition, the space was open to develop new suggestions and ideas. At the end of each group session, there was a general and open presentation of each topic under discussion.

Before the Unconference ended, each participant had to choose three words that would define the assessment of this event for them, which was characterized by the experience during the meeting. These were the words that the attendees said the most: 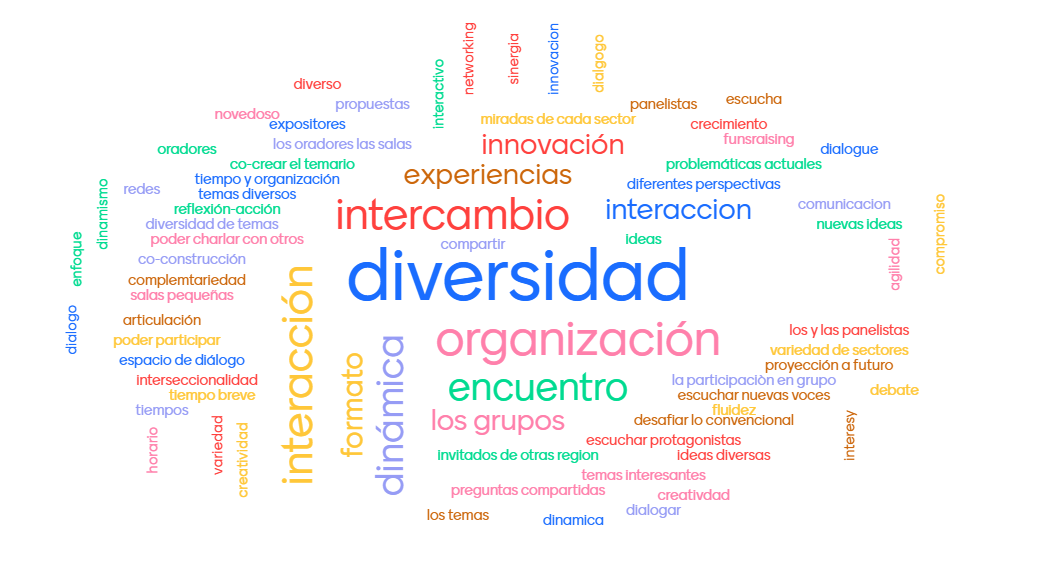 If you could not participate in this first event, we will be holding a second unconference on September 23rd, where we will continue to cultivate this space for dialogue and multisectoral exchange, innovating to strengthen civil society. We look forward to seeing you the next time!